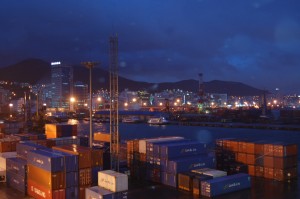 Caveat emptor /ˌkæviːɑːt ˈɛmptɔr/ Latin for “Let the buyer beware” (from caveat, “may he beware”, the subjunctive of cavere, “to beware” + emptor, “buyer”).

Generally, caveat emptor is the contract law principle that controls the sale of real property after the date of closing, but may also apply to sales of other goods.

One of the most fundamental changes to international trade has passed us by, with hardly any notice by practitioners. Ignorance of this change imposes risks on both buyers and sellers, but it would seem that many are blissfully unaware of this and enter into international sales contracts in this state of ignorance.

I refer to the parts of Incoterms 2010 involving transport of goods by sea. In all previous versions of Incoterms the defining characteristic of the terms used for seafreight, such as FOB, involved the passing of risk at the ship’s rail. This also delineated who would pay the costs involved. When the ICC first introduced this term, they were merely codifying a practice already employed for centuries past, with slight variations in different parts ofthe world. This accepted historical practice also formed the statutory basis for its definition and further interpretation in law by reference to leading legal cases over the centuries.

Incoterms 2010 well and truly overturns this proverbial applecart, whereby the latest definition alters the location of risk and payment for FOB and other seafreight terms. Whereas there is ample legal reference and precedent to pre-2010 Incoterms, the latest version, as far as I know, has yet to be tested in court.

The main risk for international traders, as intimated earlier, lies in ignorance and the all too common error in referring to terms such as FOB without any point of reference such as Incoterms 2000 or Incoterms 2010. If a contract containing a reference to FOB without mention of Incoterms etc, comes under legal scrutiny, how is a judge to determine the intention of the contracting parties, without such reference ? Similarly, if, as often happens, the term used is “FOB Incoterms” or similar, the judge is left with the unenviable task of determining which version applies. As there is now a fundamental difference between Incoterms 2010 and previous versions, this task cannot be taken lightly. Again, due to ignorance, many people assume that the latest version of Incoterms automatically applies, but this is, of course, fallacy, as is the assumption that previous versions of Incoterms cannot be used.

For Incoterms, like insurance, many people do not pay too much heed to the details, until put to the test by litigation etc, by which time it is too late to rectify any errors. If you consider yourself a professional international trader, are you fully aware of the implications of the latest version of Incoterms and have you incorporated this into your standard terms and conditions ?

If the above is true for international contracts, it follows that it is also true for drafting Proforma Invoices and Letters of Credit and is one of the most common errors I find when advising LC clients.

East-West LPG arbitrage is closed with the exception of the USG.