Demurrage is an important term in commodities trade practice. It is a period when charterer remains in possesion of the vessel after the end of period reserved for loading or unloading of commodity (called laytime). So demurrage implies additional charges for the company who chartered the ship. It is a complex subject, that remains important to the matter of overall freight cost. Contract demurrage is directly binded with a commodity sales contract or a terminalling arrangement. In such contract party assigned, let’s say a buyer of commodity has an obligation to turn a ship (take care of loading or unloading, or both) within the stated time frame (lay time). In case of crude oil trade it is typically a period of 36 hours. In case if these time period (lay time) is exceeded demurrage is being applied. It is calculated based on the formula/rate included in the contract or as a rate specified/linked to recognized published rates. For oil trade and tankers that could be for instance AFRA, Average Freight Rate Assessment that enlists rates in Worldscale terms applicable to key tanker sizes.

This “freight billing” method  is based on the weighted average of independently owned tanker tonnage. The London Tanker Brokers’ Panel assignes rates for various sizes of tankers  for a time of six months starting each January and July. The importance of AFRA in demurrage has been underscored  by the historical legal issues, as for instance a case of Fina Supply Ltd v. Shell UK Ltd. (1991). One party here was nominated to load an oil cargo at Sullom Voe in February 1989.  Sullom Voe  is an oil and liquefied gas terminal located  on the Shetland Islands (Scotland’s jurisdiction) – picture on the right. 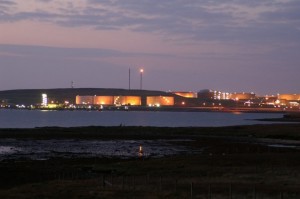 Under the demurrage provisions in the charterparty, the appropriate rate of demurrage was to be determined by applying the AFRA appropriate to the size of vessel actually used and to the date of presentation of the Notice of Readiness.

Notice of Readiness is a provision that can be found typically in contracts under the parts as “loading conditions” or “lay time and demurrage”.It is an obligation of the buyer to notify the seller (or its representative)  as to when the vessel will be ready to load and when it will arrive at the port of loading.

In the case mentioned vessel’s size was in a range of AFRA which provided a figure of 101.8 per cent as a multiplier to be applied to the specified demurrage rate in the Worldscale demurrage table. That was how the issue of amount of demurrage payment has been resolved.

Second legal form of demurrage (first was called contract demurrage) is a Charter party or CP demurrage – written down in the Charter party as agreed between ship owner and charterer and generally put in as 72 hours for the voyage.
There are instances where shipper uses demurrage to his advantage and profits from the claim. Let’s say vessel takes 40 hours laytime at load port resulting from delays caused by the supplier on shore and  20 hours at unload port. If 36 hours is specified in a supply contract, the shipper may be able to claim 4 hours demurrage from the supplier but not be liable to Charter Party demurrage. That is why sometimes suppliers protect themselves by  inserting a clause limiting their liability to a portion of any CP demurrage incurred and also some suppliers do not want to cover demurrage.

Commodity traders also need to realize  that many charter party demurrage clauses have a time window (typically up to 60 days). So their claim has to be presented in writing within a certain time frame of demurrage incident.

Anoter trap, that an unsuspecting commodity trader may encounter is that companies are incorporating clauses defining payment of demurrage within a specified time after receipt of invoice and documentation. If one forgots about the payment, substantial amounts may accrue with time.

Hence the demurrage remains often a slightly ignored but important issue that can decide about the overall profitability of the transaction.