Lead is not a popular base metal. It has lost a number of its applications due to disastrous impact on human health (since 2000 the lead industry has sponsored over US$3 million of independent research into the health and environmental impacts of lead, trying to somehow counter that).

Before its negative effects has been realized it has been widely used,  going back as much, as an existence of Roman Empire, due to its very good metal properties.  Lead is characterized by high density, softness, ductility (ability to be stretched – for instance into a wire)  and malleability (in simple words – material’s ability to form a thin sheet by hammering or rolling),  poor electrical conductivity compared to other metals and high corrosion resistance. Such properties made it a perfect material for use in water pipes (long withdrawn from this application).  Nowadays, lead is applied in solder and paints, however due to changing environmental legislation it is being increasingly singled out from this role.

It is still widely employed however  in shot gun pellets, fishing weights and weights to balance car tyres. Despite certain institutional efforts to cut down on these applications, as well.  One would think that henceforth lead market must be in deep decline, almost on the verge of extinction…

In fact, hardly so. Lead’s fortune is strongly connected with batteries market which is doing well. Lead-acid batteries usage for starting car’s engines is strongly established and hence lead’s fate will be binded with fate of automotive industry for years to come.  At present Lead-acid batteries are used in over billion of vehicles. Even with advancement of hybrid technology in cars, future of lead batteries is not at risk. 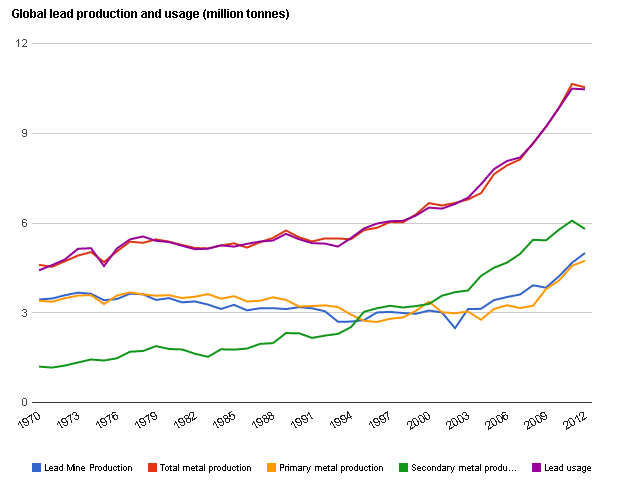 Despite the fact that nickel-metal hydride (NiMH) and Lithium-ion (Li-ion) systems are up to now the storage batteries of choice,  the best-selling hybrid electric vehicles, as the Ford Fusion, all use lead-acid batteries for SLI - starting, lighting and ignition functions. The Chevrolet Volt, one of the more prominent extended-range plug-in hybrids on the market, depends on its lead-acid battery not only for SLI functions, but also for the control of high voltage contactors.

Despite the extended efforts to get rid of applications of lead by different legislative bodies, lead’s production and consumption is increasing worldwide. General industrialization growth in emerging markets does the same for lead as for other metals (or even commodities as a whole asset class I would dare to say). Total annual lead output is around 8 million tonnes; nearly half is produced from recycled scrap – making it the most recycled metal by absolute volumes. It is also not a wonder considering that 95 % of used lead batteries are eligible for recycling.  In the US more than 80% of lead in general comes from secondary production with Europe reporting over 60% market share.

The top lead producing countries are China, USA, India and Korean Republic. China, Australia and United States account for more than half of primary production. Mexico is a huge player in recycling. International Lead Association informs that lead ores are mined at a rate of more than three million tonnes a year with a market value of around US $1 billion and the world market for refined lead stands at about US $15 billion. 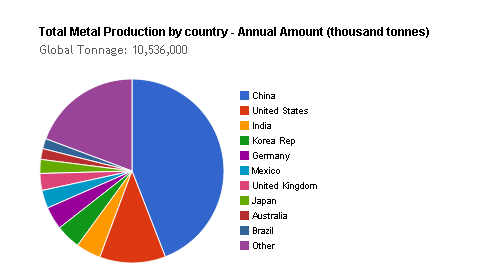 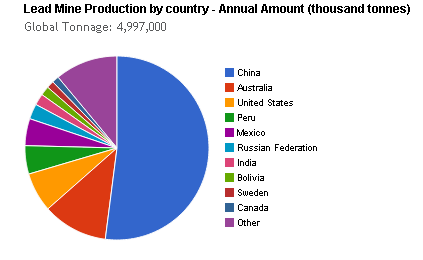 Gloom and doom inclined experts say at current use rates, the supply of lead is estimated to run out in 42 years. Some even say lead could run out within 18 years assuming on an extrapolation of 2% growth per year. Such assumptions are however ignored, considering increasing efficiency of recycling and continuous progress in cell technology, which makes a need for lead input scarcer. At present the global per capita stock of lead in use in society is 8 kg. The advantage of developed economies over developing ones is rather crushing 20–150 kg of lead per capita over 1–4 kg per capita. 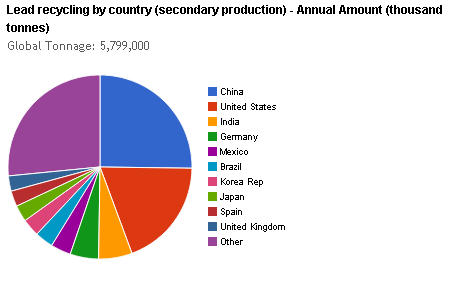 The principal application of lead is for lead-acid batteries which are used in vehicles ( 60 million petrol and diesel vehicles produced worldwide each year are equipped in lead based car batteries!), and in emergency systems (e.g. hospitals) as well as in industrial batteries found in computers and fork lift trucks. Lead is also used in remote access power systems and load levelling systems.

Defence industry:  small arms ammunition and shotgun pellets – can be produced with minimal tech requirements due to low melting point that makes casting of lead easy.

Marine industry:  the balast keel of sailboats and  scuba diving weight belts – due to its high density (implying higher weight – still maybe not the best weight-to-volume ratio of many heavy metals but cost effective) and corrosion resistance. 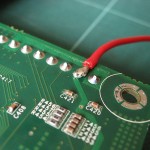 Glass and plastics industry: as a compound

Electronic industry: solder -  a fusible metal alloy used to join together metal workpieces with a melting point below that of the workpiece.

Future oriented usage of leads is quiet strongly connected with renewable energies. Underwater cables that transfer electricity  from wave farms and  near seashore located  wind farms, can not do without lead. 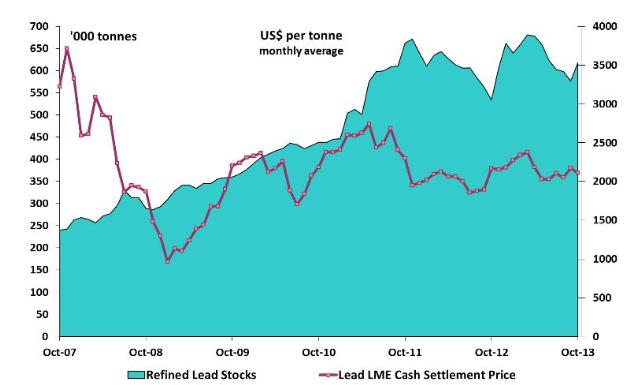 I really like this 6 years span chart from International Lead and Zinc Study Group, showing the price in relation to stock levels. In most of the time we can see a clear negative correlation here.

2007 was a peak year for a number of commodities. China, the world’s largest lead producer,  reduced its exports of refined lead, tightening the world’s supply. What supported with low inventory levels made prices shoot up. It was a 5 fold increase from the low lead prices of 2003. 2007 export reduction on the Chinese side was a result of government’s interventions. China withdrawn its vat refunds for lead exports and introduced export tax. Spokesman of import and export department of Anyang Yubei Gold & Lead Co. Ltd., the country’s second largest lead smelter, said (as reported by resourceinvestor.com) ”Governmental controlling policies raised export lead prices higher than international prices, which significantly reduced domestic smelters’ profitability. Currently, the only exports our company does are based on our long-term contracts with clients, and some of our clients can split the increase of export cost with us”.

But it was not only government policies that were to be blamed.  Domestic Chinese smelters often rely on imported lead concentrate. In 2007 lead concentrate peak prices rendered, importing concentrate, processing and exporting refined metal unprofitable.

Which was no harm to the domestic industry really, more of simple team-playing for a benefit of overall Chinese economy. Growth in lead production could not catch up to the country’s growth in demand on the side of lead acid storage battery manufacturing industry. Boom in downstream automobiles and electric bicycle production, which required a continuous supplies of lead batteries also played its part in maintaining high lead prices.

Bonanza did not last long due to global downturn of 2008. But lead prices recuperated quiet quickly, and China was careful about controlling its refining capacity, to keep supply and demand forces in balance, while withdrawing outdated facilities from production and turning into recycling as a method to keep its hands on lead. 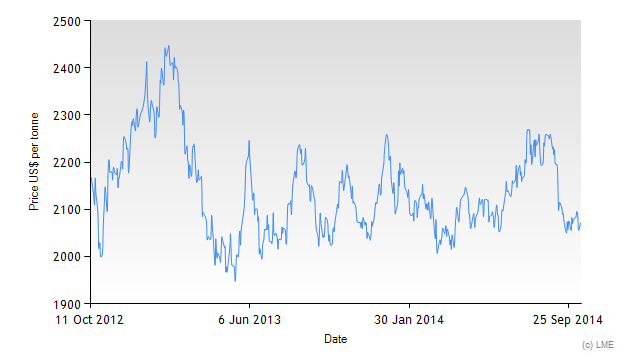 As we can see from June 2013 volatility normalized. Cash settlement price for lead stays in  range USD 2000-2215 per tonne. 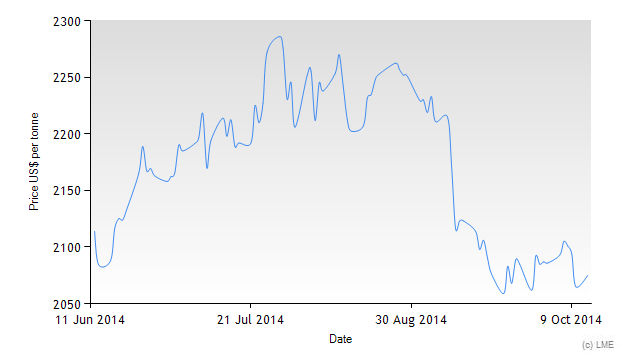 Base metals prices tumbled, due to Chinese pessimism, this time due to the assessment of the country’s money supply growth. Shanghai traders are bearish and their moods spills to London, where subsequent sell-off is accelerated. One of the worst hit metals is lead.

It also blows open the differential with “sister metal” zinc to almost $200 per tonne, the widest gap seen since 2010. Lead and zinc is traded as a relative value pair and has been called in Gulf Times article as one of the London Street’s favourite past-times.

Lead and Zinc is one of the most correlated pairs among metals, and perhaps one could say, one of the most correlated pairs among all traded commodities.  Lead has a history of higher volatility than Zinc, it moves in the wider corridor. If you take a look at the one year price chart of the pair, there are multiple instances where either of the commodity has signaled the early moves of the other.

Last years price range will probably remain in place. Some of major Zinc mines are told to await closure. It will affect Lead supply naturally, but since huge chunk of lead output comes from recycling activity, it should be easily counterbalanced.The LMEs warehouses are comfortably supplied. The ratio of cancelled warrants to total tonnage is one of the lowest among main LME metals. Since the beginning of 2014 China became net exporter of lead, what means that thirsty demand of domestic industry from before the crisis has been long ago satisfied.

Is there any factor that could possibly shake that stable market in the near term? Well, yes, weather.

As for mid term and long term outlooks,  alternative energy infrastructure is still under development. Wind and solar farms are being build world wide. Emerging markets are increasingly catching up on this trend and there is still so much to do in this regard in developed economies in order to fulfill tight carbon emission reduction goals. Green energy will need wires for transfers and batteries for storage.

Automotive industry will always do well, as a whole and on the global basis and there is no replacement for lead car batteries to be seen.

A few thoughts on Uranium trade

Be the first to leave a comment. Don’t be shy.